A collaboration between Små Grå and composer Eyvind Gulbrandsen in 2014 resulted in the performance concert "Tin!". Små Grå and 15 mannequin dolls which all had speakers in them, created a surrounding soundscape as they were placed among the audience, and Små Grå moved around. Gulbrandsen conducted the mannequins, while Små Grå performed both improvised and their own composed music.

The performance had its premiere in Oslo, DogA, and was also played in Copenhagen, Litteraturhaus. 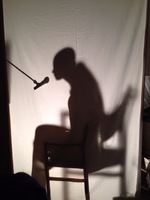